Skip to content
4 Formula One Motor Racing Circuits Around the World to Visit
January 9, 2021

If you are into motor racing, why not visit one of the circuit’s locations, combining watching the Grand Prix in person with perhaps a holiday?

Monaco is considered by many as the playground of the very rich. This is partly due to the principality having scrapped income tax in 1869, making it to this day, a tax haven. Also, Monaco is known for the luxurious lifestyle that its occupants enjoy. The other tax rates for companies and individuals are low, too. The revenue from the sale of luxurious goods and services, in the main, funds the principality. The first motor racing Grand Prix was held there on 14 April 1929. In 1950, the Monaco Grand Prix was included in the first World Championships of Drivers. It was twice bestowed the honor of being the European Grand Prix in 1955 and 1963, a designation given to one Grand Prix race from Europe each year. From a racing point of view, it is a spectacle to see the speed achieved from the cars whilst racing around the narrow streets. As a place, it is a sight to see the luxurious yachts in the harbor and visit the many boutique-like shops. A complete Monaco Grand Prix luxury travel package for 2021 would cost you between $4,995 (for a premium grandstand seating) and $8,9909 (with exclusive hospitality). This is per person and based on double occupancy. It is a once-in-a-lifetime experience for many that is well worth the cost.

If you ask someone in Monza what they are famous for, most of its residents will say it is their racing circuit, dating back to 1922. That is the Autodromo Nazionale di Monza, which hosts the Formula One Italian Grand Prix. There is a lot of Italian and Ferrari support for the event. You will find the passion of the Italians for their motorsport endearing. Monza is a city northeast of Milan and set in Northern Italy. It has a cathedral with a 16th-century bell tower. The cathedral houses the frescoed Teodolinda Chapel. In addition, there is the Royal Villa of Monza, in a neoclassical design, to visit. It is on a grand estate and features English landscape gardens. So, there is plenty of history and culture to experience as well as motor racing to see and hear. 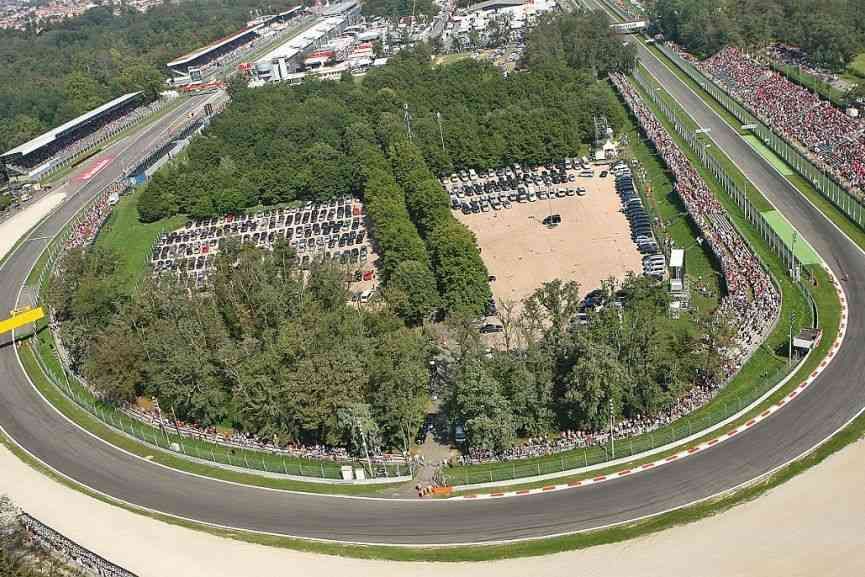 In Northamptonshire, England, the Silverstone Grand Prix Circuit can be found. It was named after the straight which once passed close to the nearby farm. In 2010, the right-hander was also named after the Silverstone village lying to the north of the circuit. The circuit is home to the McLaren and Williams formula one racing teams. The Silverstone race is 52 laps in total, with each lap being 5,891 km. The lap record achieved by Lewis Hamilton in 2019 was: 1:27.369. Hosting the first world championship in 1950, Silverstone has been the home of the British Grand Prix since 1987.

As the home of the Dhabi Grand Prix, Yas Marina, set in the desert and surrounded by palm trees, was the most expensive of the F1 circuits to build. It cost more than $1bn US dollars to construct. So, this one must be worth a visit. The circuit has 19 turns and is 4,700 km in length. The surface of the track is made from a crushed rock known as Graywacke aggregate. It was shipped all the way from a quarry in Bayston Hill near Shrewsbury, Shropshire, England, and to Bahrain. The surface is highly respected by circuit bosses because of the high levels of grip it provides to F1 drivers such as Lewis Hamilton, who has recently equaled the record of the great Michael Schumacher in obtaining 7 Formula One Drivers Championships. The stone used in the track’s construction, although to strict specifications for the circuit, is essentially the same as that found on the M6 toll road in England, which itself features 75,000 tonnes of the Bayston Hill aggregate. The Bahrain circuit is certainly fit for a king in terms of no expense being spared. Bahrain is officially the kingdom of Bahrain and a sovereign state situated in the Persian Gulf. Bahrain is known for its verdant groves of date palms. 400 palm trees line this Formula One motor racing circuit.

So, with the number of F1 races held in a year reaching a maximum of 20 in 2012, there are plenty of circuits to visit, which can also be combined with a holiday.

Previous article3 Places in the World to Interest the Musician

Next article Best Places To Visit While Travelling In Denmark